Succession
Succession is the name given to the replacement of a plant species, by another species, or a group of species over time. In simple terms it refers to how plant communities change with distance away from ‘something’ such as bare rock, a water body or a number of other things. There are two main types of succession:

Primary succession is the colonization of new sites by communities of organisms. It often occurs after a devastating event has wiped out the organisms that lived in an area, or with the creation of a new habitat. It starts with no organic matter (no vegetation, no animals, no insects, no seeds, and no soil) but only mineral material (sand, bare rock, gravel from glacial outwash, volcanic ash and lava, etc.).

There are four main types of primary succession based on its original surface:

Each stage in succession is called a sere. In biological terms succession all starts with a pioneer species and ends up in with a climax community.

Pioneer species: These are the first species to occupy a new habitat, starting new communities. They have rapid reproductive strategies, enabling them to quickly occupy an uninhabited area. Many have an asexual stage to their reproduction.

Climax community: This is the stable community that is reached, beyond which, no further succession occurs.

Lithosere is a succession that begins life on a newly exposed rock surface. This might have been created by the eruption of a volcano leaving a new, bare lava surface, or by a raised beach. It has the following stages:

Lichen species like Graphis Rhizocarpon, Rinodina and Lacanora forms the pioneer community in a lithosere, as they can tolerate desiccation.

b) Moss stage - Accumulation of soil and humus leads to the growth of mosses such as Polytrichum and Grimmia.

d) Shrub stage - Further weathering or rocks and death of herbs make the habitat more suitable for the growth of shrubs like Rhus, Caparis, Zizyphus etc.

e) Forest stages - Many light demanding, stunted and hardy trees invade the area. Vegetation finally becomes mesophytic. A steady state is reached between the environment and the biotic community.

Hydrosere is the ecological succession in the newly formed pond or lake. The process commences with accumulations of silt, enabling initial colonization by submerged or floating plants, such as water lilies and pondweeds, depending on the rate of flow and nutrient status of the water. As silting increases and organic debris is deposited, reeds, sedges, and similar plants begin to appear, forming a swamp. Organic matter builds up as peat, and conditions progressively become drier, creating a stage called a fen, dominated by herbaceous species, and then a carr, in which shrubs and small trees predominate. Eventually, the substrate is sufficiently stable to support the larger trees of mature forest species.

The following table shows the different stages of hydrosere:

The following presentation shows an example of hydrosere in UK - Poynton Pool, Cheshire.

Halosere is the plant succession in salty conditions. The first flowering plants that begin to grow on salt marsh are pioneer species like Salicornia sp (glasswort) or Spartina spp (cord grass). Migration must have occurred for anything at all to be present on the site. If their seeds are sufficiently undisturbed (i.e. if the mud has built up high enough) they will germinate and grow successfully. Small pioneer plants will begin to colonise the surface of the mud. Consequently the muddy shore spends more time emersed (out of the water). Conditions become suitable for more species and they migrate to the area and begin to grow as well. Following the stages of establishment, competition and stabilisation,  halosere may often end, at some distance inland, with a mature deciduous forest - the climatic climax community of the UK.

An example of halosere in UK can be found in Hurst Castle and Keyhaven salt marshes. Click on the box below to begin the animation.

Tree with characteristics of deciduous woodland in UK

The following diagram shows the characteristics of deciduous woodland trees in UK.

Management of heather moorland in UK - a video

Temperate deciduous forests are most notable because they go through four seasons. Leaves change color in autumn, fall off in the winter, and grow back in the spring; this adaptation allows plants to survive cold winters.

The climatic climax vegetation in UK is the temperate deciduous forest. UK is at a latitude where one would expect taiga to predominate instead of temperate forest if it weren't for the effect of the Atlantic Conveyor. Deciduous forests receive from 2 to 5 feet (0.5-1.5 m) of precipitation (both rain and snow) spread fairly evenly throughout the year, Humidity in these forests is high, from 60% to 80%.

The term deciduous refers to the plant’s ability to lose it’s leaves when times get tough. Temperate deciduous forests are most notable because they go through four seasons as summer, autumn, winter, and the spring. Leaves change color in autumn, fall off in the winter, and grow back in the spring; this adaptation allows plants to survive cold winters.

Compared to tropical rainforest, trees in temperate deciduous forest are less dense and widely spaced. Only a few types of trees dominant the forest. Most of the trees are broadleaf trees such as oak, maple, beech, hickory and chestnut. The five layers in the temperate deciduous forest and their main vegetation in UK include the:


Take a walk in the London's Sydenham Hill Woods to find some specific trees and plants in UK!

Plants in the temperate deciduous forests adjust their growth and activity to the seasons of the year:

Click to explore the temperate deciduous forest in Northern Ireland! 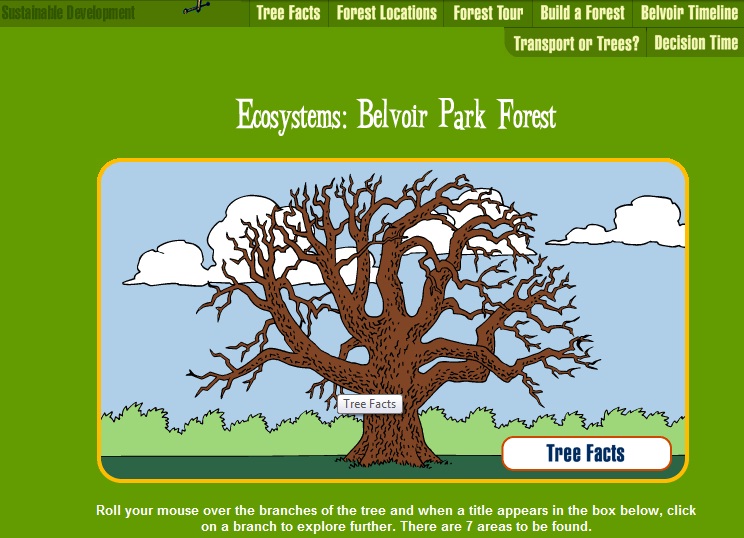 75% of the world's heather moorland is found in Britain. it can be found in many upland areas such the North Yorkshire Moors. The uplands of Northern England were once covered by deciduous woodland. Some heather would have been present, but in relatively small amounts. Gradually the forests were removed during the early Middle Ages for timber and fuel purposes, and to create space for agricultural activities. The soil deteriorated as a result and heather came to dominate the plant community. Sheep grazing was the major form of agriculture in the area at the time and the sheep prevented the re-growth of woodland by destroying any young saplings.

In more recent times the process of controlled burning of the heather has taken place. The heather is burnt after 7 - 15 years of its life cycle before it becomes mature and allows colonization of the area by other plants. The ash adds to the soil fertility and the new growth that results increase the productivity of the ecosystem and provides the sheep with a more nutritious diet than is provided by the elder heather. This controlled burning maintains a plant community which is not the climatic climax of the area, and is therefore a plagioclimax.

The burning management creates an ideal habitat for large populations of red grouse, a game bird which supports a lucrative shooting industry in upland Britain. Firing the heather does a number of things: it eliminates plant species that might compete with heather; it stimulates new heather shoots, the staple food of red grouse; and it encourages the germination of heather seeds.

Heather moorland is also managed (sometimes illegally) by eliminating potential predators of red grouse and their chicks such as foxes, stoats, crows and raptors. Light grazing by sheep is also encouraged to prune the heather.