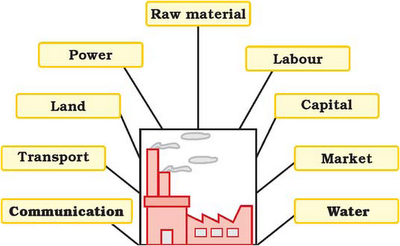 Why did the factory come about? As demand for goods rose after 1775, small domestic manufacturers could not keep up. Large-scale production, facilitated by new power sources such as the steam engine, made it economic to invest in more efficient powered machinery. The ability to produce more, quicker, promised large profits to the potential factory owner (source)

Weight Gain Industry: An industry that makes products which get heavier in the manufacturing process. A good example are cars. All the individual parts that go to make a car (tyres, windscreens, mirrors, etc.) don't weigh very much, but the finished product does way a lot. Because of this weight gain industries tend to locate near the market place (their customers).

Weight Loss Industry: An industry that loses weight in the manufacturing process. A good example is steel which uses huge amounts of iron ore and coke to make it. In the process of making the steel there is a lot of waste products making the finished product lighter. Because of this weight loss industries tend to locate near to the raw material they need because transporting the finished product is cheaper.

Just-in-time Manufacturing (JIT): Industries that order the supply of parts (components) as and when they need them. By doing this you can save on storage costs, but it does mean that you have to have excellent communication and relations with your suppliers.

Just-in-case Manufacturing (JIC): Industries that stockpile a supply of parts (components) just in case they are needed in the production process. This increases storage costs, but ensures that they never run out of parts to manufacture.

Footloose Industries: Normally tertiary or quaternary industries that are not tied to raw materials and therefore don't have such strict location requirements. Because of this they might look for more human factors like skilled labour, good housing and recreational facilities or access to capital.

Perishable Goods: Products that go rotten very quickly e.g. bread, milk, cakes, fruit and vegetables. Although quicker transportation and improved refrigeration allow perishable products to be transported all over the world for customers to receive truly fresh products, these industries have to locate near their market (customers).

Countries in the early stage of development usually have a high percentage of the population in primary employment. This is because most people are engaged in agricultural activities.

As a country begins to develop an industrial base there is an increase in the secondary sector. An increase in machinery on farms means fewer people are needed. People tend to migrate to urban areas to get jobs in factories.

When a country becomes more economically developed there is a greater demand for services such as education, health care and tourism. Therefore the tertiary sector undergoes growth. By this time computers, machinery and robots replace people in the secondary sector hence the decrease in secondary jobs.

The UK has a low proportion of people working in primary industry. This is partly because of mechanisation. Machinery has taken over jobs in the primary sector. Also, as primary resources have become exhausted (e.g. coal) The UK now imports a considerable amount of its non-renewable resources. The number of people employed in the secondary sector is falling. This is because fewer people are needed to work in factories as robots are taking over jobs. The tertiary sector is the main growth area. Most people work in hospitals, schools, offices and financial services.

Ghana is an LEDC or Less Economically Developed Country. The majority of people work in the primary sector. This is due to the lack of machinery available in farming, forestry and mining. Farming is very important because people often grow the food they eat. Few people work in secondary industries due to the lack of factories - machinery is too expensive and multi-national companies rely on the raw materials available in Ghana to assist in manufacturing products

What makes Biopolis an attractive location for companies and people? Click on image to read from A*Star webpages 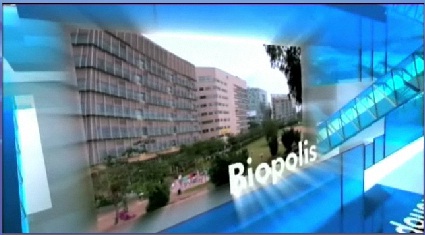 The island republic of Singapore, though small, is an interesting market for overseas companies. It serves as an excellent operational hub for the Asian operations of international companies, with the main reasons being

The surrounding markets of Southeast Asia, China, Australia, and India, are serviceable from Singapore

So what facilities does Fusionopolis offer ? Click this image to read the details

Singapore's integrated research network that offers multidisciplinary capabilities across basic and translational research has drawn pharmaceutical and biotech companies that seek to improve R&D decision making and accelerate innovation in Asia. The Biopolis' expansion is a key initiative amongst many to meet companies' rising need to capitalize on Asia's growth story. News source