Distinction between weather and climate, ecosystem

Humidity is the amount of moisture or water vapor in the air. 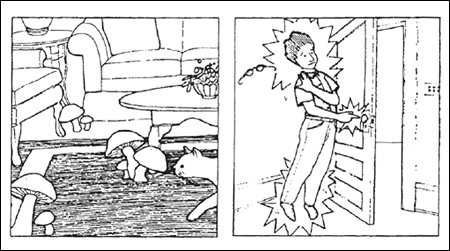 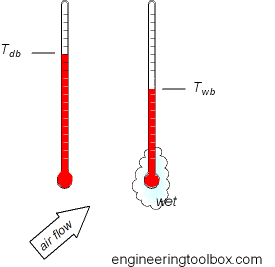 Dry Bulb Temperature - Tdb - can be measured with a simple thermometer as shown above.
Wet Bulb Temperature - Twb - can be measured with a standard thermometer with some wet clothing, cotton or similar, around the bulb. Note that a continuously air flow is important to evaporate water from the wet clothing and achieve a correct wet bulb temperature.
Sufficient air movement can be achieved with a sling thermometer or similar.  Relative Humidity can be estimated from the graph below 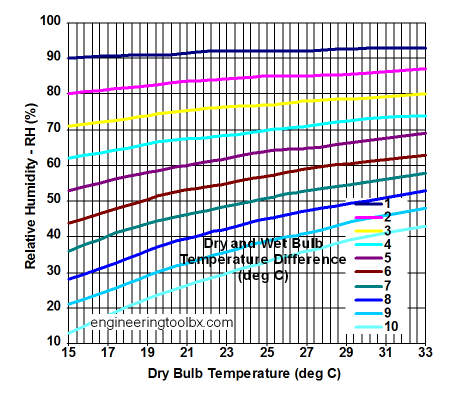 A dewpoint, or condensation, hygrometer is another common way to measure the humidity.

Such an instrument has a mirror that exposed to the open air, and which can be cooled as precise track is kept of the mirror's temperature. As the mirror cools, dew (or frost if the temperature is below freezing) will form on it. The temperature at which this happens is the air's dew point (or frost point in below-freezing air). (source) 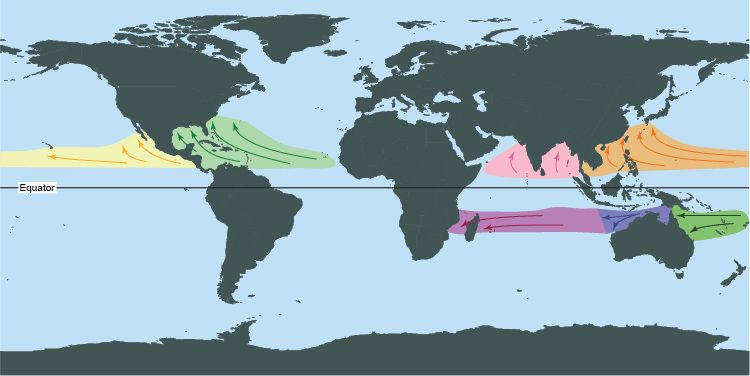 You can watch a Tropical Cyclone Formation Probability from the NOAA webpage... 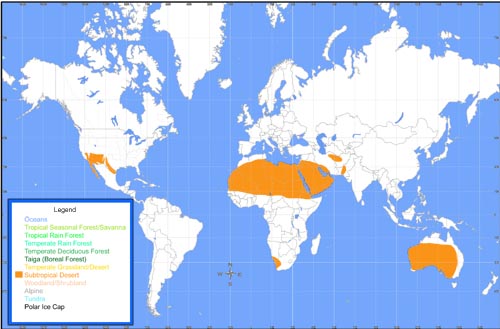 These desert climates are found in low-latitude deserts approximately between 18° to 28° in both hemispheres. these latitude belts are centered on the tropics of Cancer and Capricorn, which lie just north and south of the equator. The dry arid desert is a true desert climate, and covers 12 % of the Earth's land surface.

One of the oldest and largest deserts, the Namib stretches inland from the Atlantic Ocean, covering large swathes of Namibia and parts of Angola and South Africa. This arid hotspot surprisingly supports a diverse number of plants and animals, some of which are found nowhere else in the world. The Namib region is highlighted in yellow. 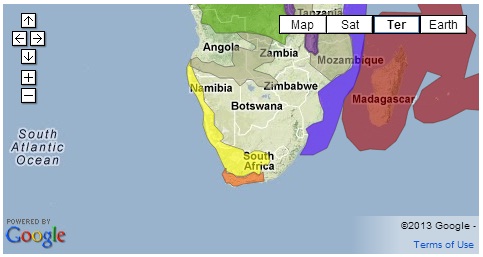 There is also an extraordinary diversity of succulent plants, as well as the shrub-like Welwitschia mirabilis, which has only 2 leaves and can live for over 1,000 years! 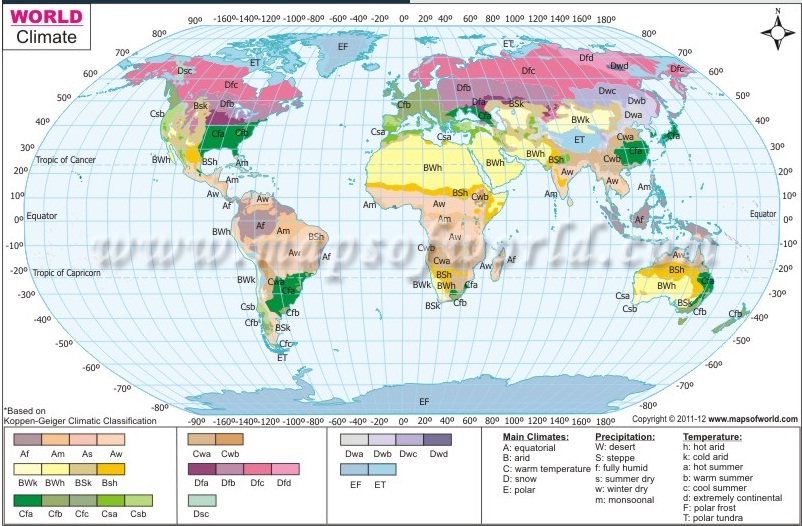 What is 'weather' and 'climate'?

Weather is the day-to-day state of the atmosphere, and its short-term (minutes to weeks) variation. Popularly, weather is thought of as the combination of temperature, humidity, precipitation, cloudiness, visibility, and wind. We talk about the weather in terms of "What will it be like today?", "How hot is it right now?"

Climate is defined as statistical weather information that describes the variation of weather at a given place for a specified interval. More formally it is the weather of a locality averaged over some period (usually 30 years) plus statistics of weather extremes.

A rain gauge is an instrument to measure rainfall, which is measured in millimeters. Occasionally the rain fall is also reported in centimeters or in inches. What the rainfall measure is telling us is the height of rain water collected in a vessel that has vertical walls and has uniform cross section from bottom to the top.
Therefore, in principle any vessel that has a uniform cross section can be used as a rain gauge. However,from an open rain gauge collected water will evaporate quickly when the rain stops, affecting the final reading. 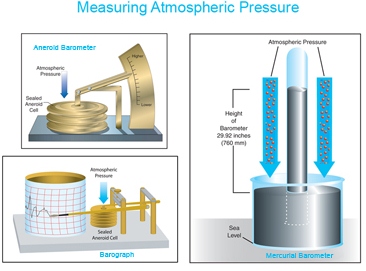 A mercurial barometer has a section of mercury exposed to the atmosphere. The atmosphere pushes downward on the mercury (see image). If there is an increase in pressure, it forces the mercury to rise inside the glass tube and a higher measurement is shown. Read details of other atmospheric pressure readers 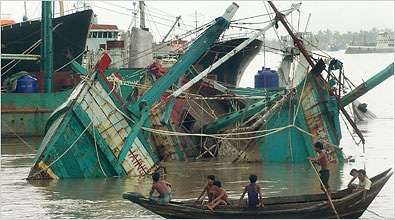 Cyclone Nargis moved across southern Myanmar on the evening of May 2, 2008, leaving a trail of death and destruction before petering out the next day. It devastated much of the fertile Irrawaddy Delta and Yangon, the nation's main city. Nearly 85,000 people died.

The Government of Myanmar, the Association of Southeast Asian Nations (ASEAN) and the United Nations in the first comprehensive report inputs

- The cyclone wiped out the livelihoods of families overnight, flooding over 600,000 hectares of agricultural land, killing up to 50 per cent of draught animals, destroying fishing boats and sweeping away food stocks and agricultural implements.

- in mid-June, 55 per cent reported having only one day of food stocks or less, and have relied in part on the steady flow of relief supplies.

- The total economic losses amount to about 2.7% of the projected 2008 GDP, with the effects of the cyclone concentrated on a region important for agriculture and fishing in Myanmar. source 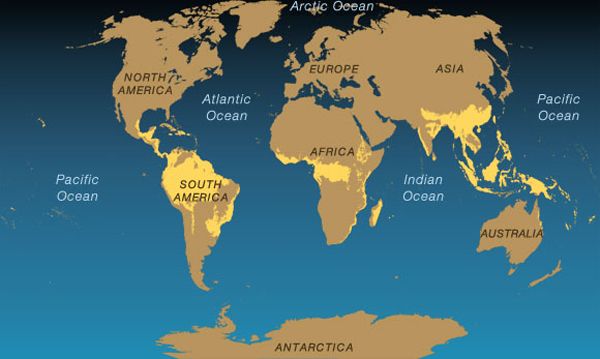 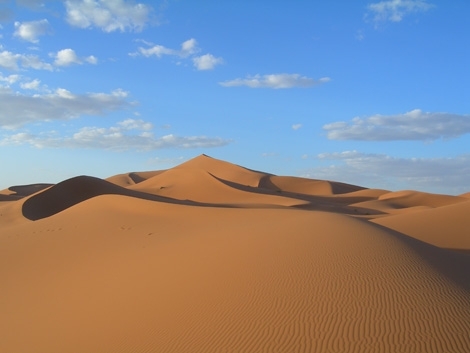 The Sahara Desert is the largest hot desert in the world and occupies approximately ten percent of the African continent.The ecoregion includes the hyper-arid central portion of the Sahara where rainfall is minimal and sporadic.
From the Atlantic Ocean in the west, the greater Sahara stretches across Africa to the Red Sea and down to the highlands of Ethiopia, encompassing an area 9,100,000 square kilometres

How to plants / animals adapt? 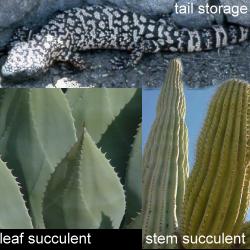 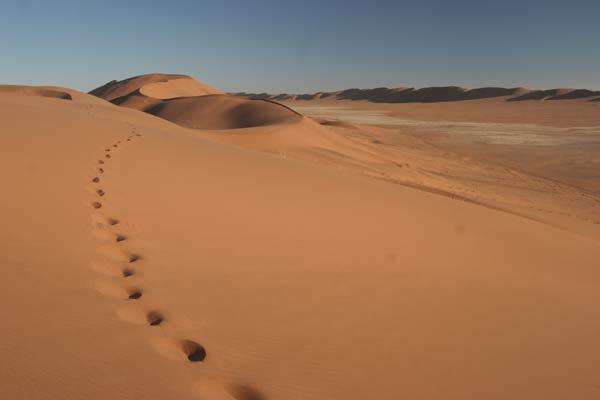 The vast Namib Sand Sea, which covers roughly 13,125 square miles (34,000 square kilometers) along the coast of Namibia, is one of the world's oldest and largest sand deserts.

The major threats to environment and biodiversity along the coast are in particular:

Read more from the URL below

The maximum (MAX.) and minimum (MIN.) temperatures are the highest and lowest temperatures to have occurred during the past 24 hours.
The AT OBSN temperature is the temperature at the time you take your observation.

At a weather station 4 thermometers are kept in a white slatted box called a Stevenson Screen. 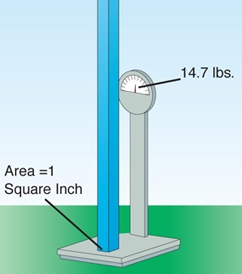 Pressure is an idea scientists use to describe how gases and liquids "push" on things. If you imagine a column of air that is 1 inch square and goes from the Earth's surface all the way up through the atmosphere, the pressure of the air in that column is 14.7 pounds per square inch. Now that may seem like a lot of pressure pressing down on your body if you think of how many square inches it takes to cover your body!

Fact : Air pressure changes with the weather. In fact, it's one of the most important factors that determines what the weather is like. You can do some basic weather forecasting by using the wind and barometric pressure. (source)

Wind direction measurement
Weather vanes work by swinging around in the wind to show direction it is blowing from. The head of the cockerel would point into the wind,
indicating the direction wind was blowing from.

Wind speed measurement
The main instrument used to measure the speed of the wind is an anemometer. The little cups on this device catch the wind and spin round at different speeds according to the strength of the wind.  A recording device is used to count how many times they spin round in a given time.

Clouds are classified according to their height above and appearance (texture) from the ground. The following cloud roots and translations summarize the components of this classification system  1) Cirro-: curl of hair, high. 2) Alto-: mid.     3) Strato-: layer.           4) Nimbo-: rain, precipitation.   5) Cumulo-: heap.

Vegetation in a rainforest 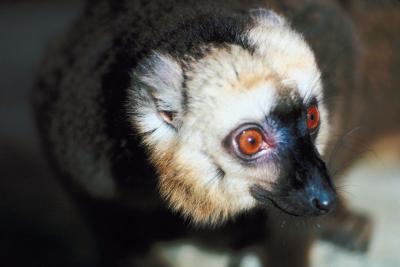 There are two types of rainforests, tropical and temperate. Tropical rainforests are found closer to the equator where it is warm. Temperate rainforests are found near the cooler coastal areas further north or south of the equator.
The tropical rainforest is a hot, moist biome where it rains all year long. It is known for its dense canopies of vegetation that form three different layers. The top layer or canopy contains giant trees that grow to heights of 75 m (about 250 ft) or more. (source)
Madagascar's rain forests, which lie on the east coast of the island, receive more than 100 inches of rain annually. Five distinct layers make up a tropical rain forest, including an overstory, canopy, understory, shrub layer and forest floor.

A treasure trove worth saving

There is only one place remaining in Southeast Asia where tropical rainforests can still be conserved on a grand scale.

This is the dense forest that stradddles the borders of Brunei, Indonesia and Malaysia on the island of Borneo.Here one finds such endangered species as the: 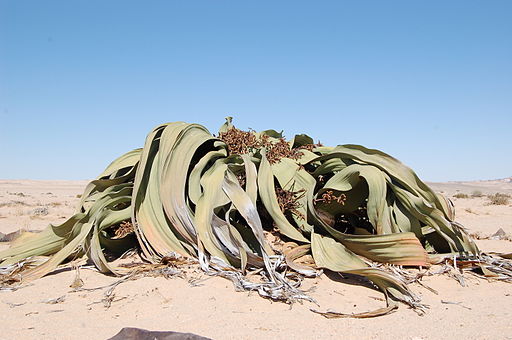 Welwitschia Mirabilis comprises of only two leaves that continue to grow from a seedling throughout its life. These leaves are leathery, broad and lie along the ground. In time the two leaves become shredded and tattered by the wind, eventually making the plant look as if it has many frayed leaves.

Welwitschia is thought to be a species of desert flora that is a living relic from the Jurassic period when gymnosperms were the dominant land plants in the age of dinosaurs. Welwitschia are certainly plant survivors in an incredibly harsh and arid desert climate

Namibia is one of the world’s largest producers of gem quality diamonds, with about 98% of diamonds produced being gem quality. Namibia produced a total of 1.4 Mct in 2003. In 2003 it was estimated that onshore operations account for about 55% of production and offshore operations for 45% operations.

It is estimated that over 100 Mct have been produced since mining began in 1908. Diamonds are mined along ancient river terraces along the banks of the Orange River, palaeo beach deposits along the south western and western coast of Namibia, as well as from marine deposits situated offshore. Namibia has the richest marine diamond deposits in the world, with an estimated reserve of over 1.5 billion carats.