He was employed as a teacher of industrial drawing at the Gewerbemuseum (Industrial Museum) in St. Gallen in 1892, where he taught until 1898. There, where at first mainly landscape watercolours and drawings of mountain farmers emerged, Nolde became known through small coloured drawings of Swiss mountains.

Nolde finally moved to Munich after deciding to become a painter, but the academy under Franz von Stuck dismissed him. He joined Adolf Hölzel in Dachau in 1899 to become his pupil and went to Paris in 1900 to increase his knowledge at the Académie Julien. Nolde studied the Neo-Impressionists Vincent van Gogh, Edvard Munch and James Ensor, which, around 1905, gradually led him away from his early Romantic Naturalism and to the discovery of his own style with a strong emphasis on colour, colourful and glowing flower pictures came into existence.

Emil Nolde’s works from around 1912 often feature grotesque juxtapositions. Child and Large Bird is one example of such works with its surrealist proportions and absurd combination of figures. 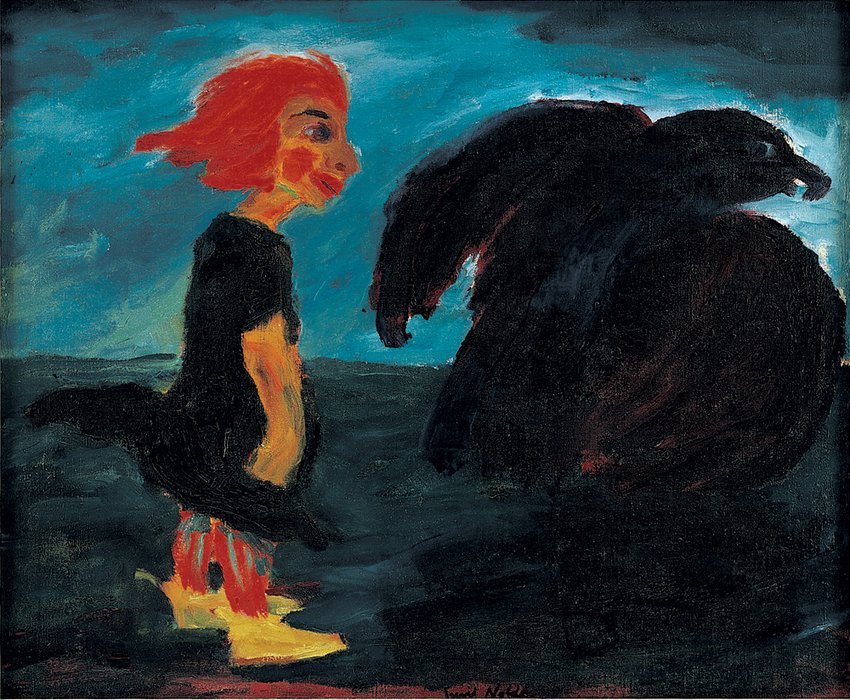 The bird is frighteningly large compared to the child. Nevertheless, its superior size does not prevent it from being scared away by the little girl’s peculiar physique. The girl’s head is too large in proportion to the thin neck and the tiny body.  Read more of this analysis HERE

Emil Nolde was actually born Emil Hansen, the son of a farmer from the North of Germany near the Danish border. He had a solitary and brooding nature not unlike others from the North. He was often considered an outsider but admired for his inner conviction and ability to create art with intense psychological power. In 1902, he changed his last name to Nolde when he married Ada Vilstrup and began his artistic career began at the age of 35. 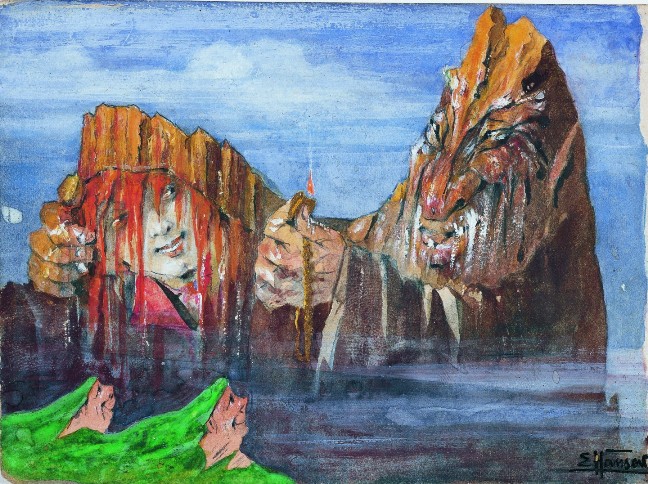 His art during Nazi rule

In 1934, Nolde was expelled from the Akademie der Kunste. In 1941, the Nazis forbid him to paint. 1,052 of his works were removed from museums and 26 of his works were included in the ìDegenerate Artî traveling exhibition in 1937. After 1941, Nolde left Berlin and never returned. Instead, he and his wife retreated to Seebull House near the Danish border. In 1944, an Allied air raid destroyed his Berlin studio filled with many valuable works of art and his meticulously kept archive documenting his graphic work.