During World War I, Kirchner struggled with alcoholism and he was discharged from the army in 1915 to enter the sanatorium at Kreuzlingen. Over the next few years, he was in and out of institutions both in Germany and Switzerland. His chronic insomnia led to dependence on drugs and alcohol which intensified his severe emotional and physiological problems.

Key aspects of his art

The human figure was central to Kirchner's art. It was vital to the pictures that took his studio as their backdrop - pictures in which he captured models posing as well as aspects of his bohemian life

Kirchner believed that powerful forces - enlivening yet also destructive - dwelt beneath the veneer of Western civilization, and he believed that creativity offered a means of harnessing them. This outlook shaped the way in which he depicted men and women in his pictures. 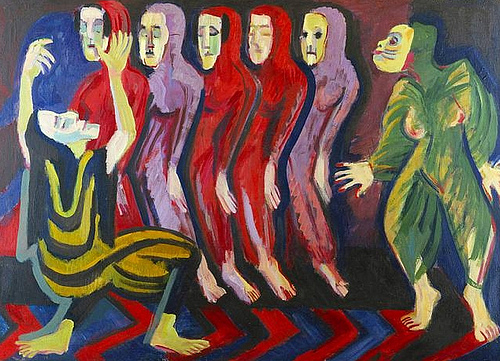 "Everyone who renders directly and honestly whatever drives him to create is one of us." 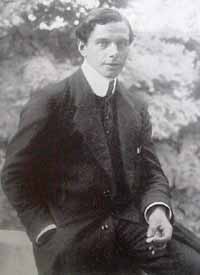 Ernst Ludwig Kirchner was born in Aschaffenburg on 6 May 1880. In 1901 he began to study architecture at the Technische Hochschule in Dresden. He continued his studies in Munich from 1903/04 and finished his degree back in Dresden in 1905. Together with his fellow students Erich Heckel, Karl Schmidt-Rottluff and Fritz Bleyl, Kirchner founded the artists’ association "Brücke" in June 1905 and hencefoth comitted himself to painting, drawing and printing. In 1906 he met Doris Große, who became his favourite model until 1911. He spent the summers between 1907 and 1911 in Goppeln, at the lakes of Moritzburg and on the island of Fehmarn with various members of the "Brücke". In his work he focused on the female nude in nature, expressed in strong and impulsive images.

He moved to Berlin in 1911 and founded the MUIM-Institut with Max Pechstein, in order to pass-on new artistic convictions and demands through "Moderner Unterricht im Malen" (modern teaching of painting) 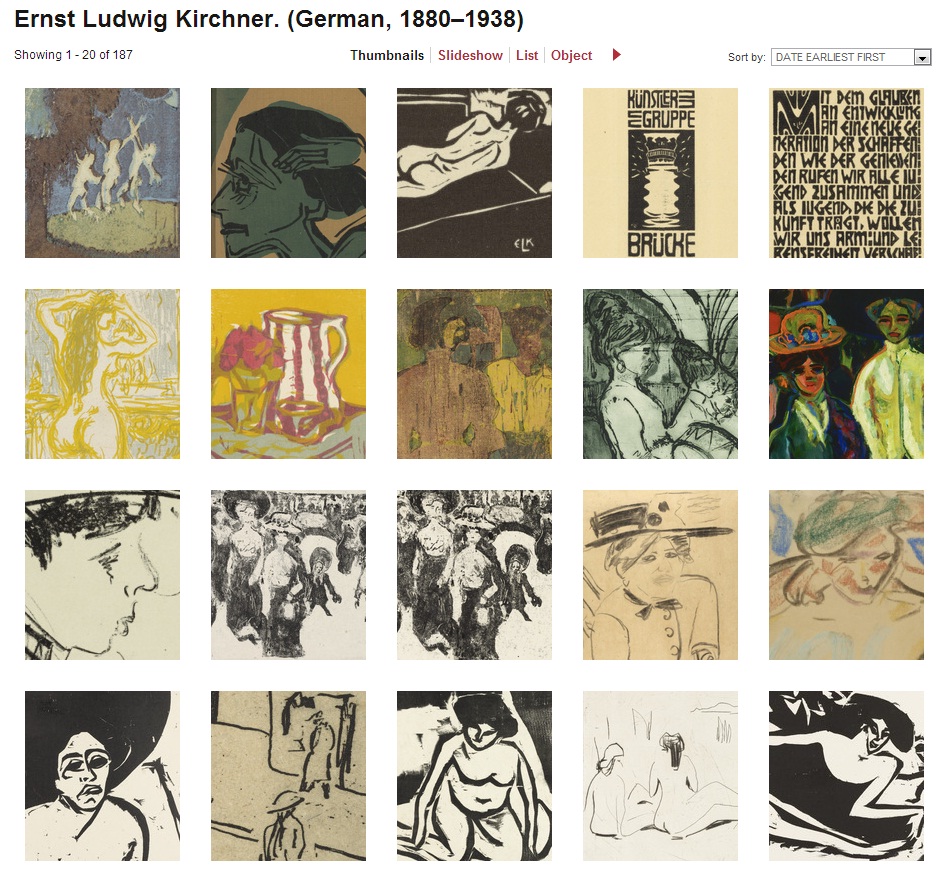 In 1921, he had an exhibtion of fifty works at the Kronprinzenpalais in Berlin and in 1923 he had a retrospective show at the Kunsthalle in Basel.

In 1931, he was apointed a member of the Prussian Academy of Fine Arts.

In 1937, he was asked to resign after the Nazis declared his art "degenerate" and confiscated 639 works from museums in Germany. Ironically, the same year, he had an exhibition at the Detroit Institute of Art in the United States.

In 1938, distraught over the Nazi denunciation of his work, he committed suicide.

A video explaining the context of Expressionism