Butoh was a movement that began in Japan in the late fifties. It was rebellion against Western dance and Japanese Traditional dance. It also has it's roots in German Expressionism.(Die Neue Tanz)

Tatsumi Hijikata was the founder of Butoh. He was inspired by the writings of Jean Genet, the Marquis De Sade, and Antonin Artaud's Theatre of Cruelty. Butoh was born out of Post war Japan. It was a movement that was a search for a new identity, to establish meaning for a society after defeat. Butoh the dance of darkness is an exploration into the unconscious, it is the realm of the imagination, and shadows.It also investigates the pre-history of man; the primordial.

The Suzuki method of acting, developed by Tadashi Suzuki, is one of the most commonly taught acting methods in the United States. . The Suzuki method works to build an actor’s awareness of his body, especially his center. The method uses exercises that are inspired by Greek theater and martial arts and require great amounts of energy and concentration. They result in the actor becoming more aware of his natural expressiveness and allow him to commit more fully to the physical and emotional requirements of acting.
source: MIT

Physical theatre is a form of performance in which movement and physicality of the body has a predominant part in the narrative of a piece. This type of theatre often has close links with contemporary dance, Comedia dell’arte and mime. It’s hard to pin down the exact origins of physical theatre as it has grown and developed over many years, through many different practitioners and art forms

In the early 1960s Butoh dance exploded onto the Japanese stage. The shockwaves ripped the Japanese dance community apart and shattered stereotypical images of the Japanese people. Sexy, violent, humorous and nihilistic, Butoh confronted Japanese society, ridiculing and mocking traditional conventions of beauty and behaviour. This documentary pierces the mystery and mystique of a dance movement adored by the West and largely ignored by the Japanese. It uses archival and modern footage of leading Butoh performers - Dairakudakan, Hakutobo, Kazuo Ono - and interviews with Butoh specialists to throw light on the essential Butoh themes of darkness, violence and eroticism to get to the core of the nature of Butoh. 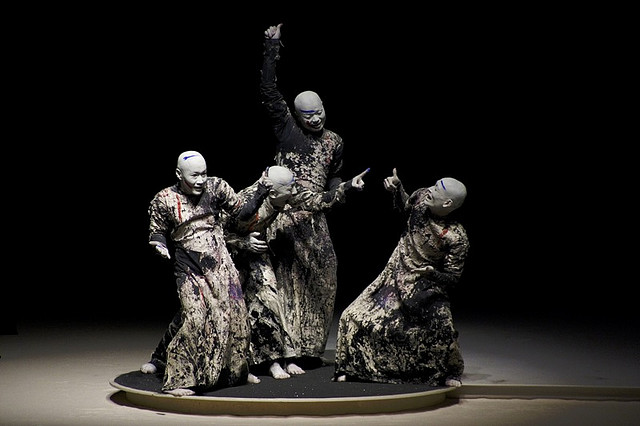 This Butoh composition will be performed in Singapore's Esplanade Theatre on 30th April and 1st May 2014:

Try typing 'Butoh' or 'Hijikata Tatsumi' in this search box to read some Google Books...