The term “nationalism” is generally used to describe two phenomena:

(1) the attitude that the members of a nation have when they care about their national identity, and

(2) the actions that the members of a nation take when seeking to achieve (or sustain) self-determination.

(1) raises questions about the concept of a nation (or national identity), which is often defined in terms of common origin, ethnicity, or cultural ties, and while an individual's membership in a nation is often regarded as involuntary, it is sometimes regarded as voluntary.

How to build a nation?

Francis Fukuyama, who in 1992 famously predicted “the end of history” because liberal democracies and free market economies suggested an endpoint in the evolution of government, said that external forces can erect the skeleton of state in an embattled country, creating police forces, administrative structures, and taxing authorities. But nation-building goes further and involves a shared sense of national identity, built on elements that tie people together — such as shared culture, language, and history — that cannot be imposed from without.

Read more from this article in Harvard Gazette.

"Economic nationalism—the urge to keep jobs and capital at home—is both turning the economic crisis into a political one and threatening the world with depression." urges the writer in this Economist article from 2009.

From early on, teachers pass on patriotic myths to elementary school children in songs glorifying war and fairy tales presented as history, wherein government actions account for all success, wealth, and peace.

There are many websites with information on this topic, here are just a selection, try using the Sweetsearch box in the right-hand column to find more...

The New Face of French Nationalism 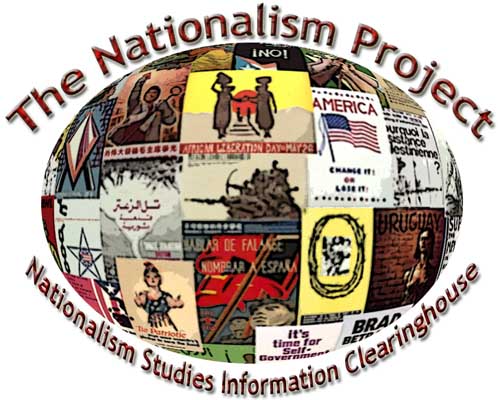 source : http://www.nationalismproject.org/index.htm
The Nationalism Project is one of the most widely used nationalism studies resources on the Internet and provides users with a clearinghouse of scholarly nationalism information including: leading definitions of nationalism, book reviews, web links, subject bibliographies, a bibliography of more than 2,000 journal articles, and much more. The site was created in 1999 by Eric G.E. Zuelow, currently Assistant Professor of European History at the University of New England in Biddeford, ME.

"What's the most powerful political force in the world? Some of you might say it's the bond market. Others might nominate the resurgence of religion or the advance of democracy or human rights. Or maybe it's digital technology, as symbolized by the Internet and all that comes with it."

Access the first link to read more from this article

Use the search box below to search our EbscoHost database, you will need to enter a password which you can find in the Firefly student portal, email us ([email protected]) or ask one of the librarians.

French national identity and integration: Who Belongs to the National Community?

France is in the midst of an ongoing debate over what it means to be French — a debate of crucial  importance for immigrants and their descendants. The central question revolves around whether it is possible to have what some call “hyphenated identities.” Can someone belong to France and still have ties to a minority culture or a foreign country? While the concept of “dual belonging” is accepted in multiculturalist societies (such as the United States and Canada), it has been criticized in France, where many perceive identity as a zero-sum game: commitment to a minority culture or a foreign country detracts from the quality of one’s commitment to French identity.

Read from this article by Patrick Simon, who  is Director of Research at the Institut national d’études démographiques (INED) and is a fellow researcher at the Center for European Studies (CEE) at Sciences Po.