IB English - The Elephant Vanishes (by Haruki Murakami): About the book

A guide to resources about 'The Elephant Vanishes' by Haruki Murakami, compiled by your librarians.

Critic for the book

Summary of the title story: The Elephant Vanishes

Like other stories in this collection, "The Elephant Vanishes" focuses on a strange incident that leaves its protagonist disoriented. An unnamed narrator tells the story of how an aged elephant and its keeper mysteriously disappear one night from his town's elephant house. The narrator, who is the protagonist of the story, recalls the events leading up to the elephant's sudden vanishing, the news coverage of the incident, and the futile efforts of the townspeople to find the elephant and the keeper. He also discusses the strange circumstances of the elephant's disappearance, which indicate that the elephant apparently vanished into thin air. After meeting a magazine editor who is a potential love interest, the narrator ends up talking about how he witnessed the elephant shrinking or the keeper becoming bigger or both on the night of their disappearance, and the story concludes with the bewildered narrator lamenting the loss of the elephant and the keeper.

An elephant vanishes and nobody cares. Like other Murakami stories, this one is imbued with a sense of things being out of order in urban, contemporary society, which leaves its characters feeling alienated, disillusioned, and unable to make choices about their lives.

Why is the narrator obsessed with the elephant?

How do we know that the narrator is obsessed with the elephant?

So back to the original question: Why is he obsessed with the elephant?

The earth would continue its monotonous rotations, politicians would continue issuing unreliable proclamations, people would continue yawning on their way to the office, children would continue studying for their college-entrance exams. Amid the endless surge and ebb of everyday life, interest in a missing elephant could not last forever. And so a number of unremarkable months went by, like a tired army marching past a window.

When the elephant disappears, his sense of balance and unity disappears with it. His obsession with order is destroyed and he lives by habit, using memories of the “pragmatic world” to guide him even though he no longer feels himself to be a part of it. The elephant and its keeper (another Noboru Watanabe) had become the focal point of his obsession with unity and when he saw the balance between them change, it changed the balance within him.

The following video shows an example of the relationship between elephant and its keeper.

Introduction of the book


Different covers and illustrations of the book, click to view reviews/details.
Hover mouse on the right panel to scroll and select.


The Elephant Vanishes is a collection of 17 short stories by Japanese author Haruki Murakami and its first English publication was in 1993. Stylistically and thematically, the collection aligns with Murakami's previous work. The stories mesh normality with surrealism, and focus on painful issues involving loss, destruction, confusion and loneliness. The title for the book is derived from the final story in the collection. This book has received much acclaim from American and Japanese critics, who have lauded Murakami's originality and cosmopolitan style.

Haruki Murakami makes this collection of stories a determined assault on the normal. A man sees his favorite elephant vanish into thin air; a newlywed couple suffers attacks of hunger that drive them to hold up a McDonald's in the middle of the night; and a young woman discovers that she has become irresistible to a little green monster who burrows up through her backyard.

By turns haunting and hilarious, The Elephant Vanishes is further proof of Murakami's ability to cross the border between separate realities -- and to come back bearing treasure.

More about the title story 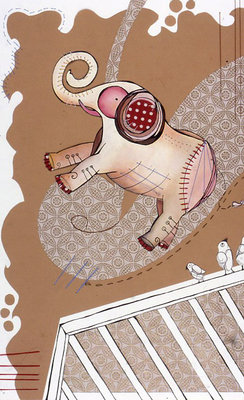 The short story takes place in a suburb of Tokyo during the 1980s, when Japan was experiencing an economic boom. The town is affluent, and its inhabitants enjoy a relatively peaceful life, which is only occasionally disrupted by bizarre incidents such as the vanishing of the elephant. Prosperity has led to new developments such as the high-rise condos destined to replace old institutions like the zoo. The story also takes place at a time when the process of Americanization was well under way in Japan, as the narrator states that his company likes to use English words such as “kit-chin” to sell products.

An unnamed editor of a magazine for young housewives appears in the second part of the story as the narrator's potential love interest. She meets the narrator at a party to launch an advertising campaign thrown by the manufacturing company for which the narrator works. An intelligent and curious twenty-six-year-old woman, the editor talks to the narrator about the kitchen appliances his company is selling, the idea of pragmatism, and other topics at the party and afterward while they are having drinks in a hotel bar. Although they seem to enjoy an initial connection, after the narrator recounts his witnessing of the bizarre circumstances leading to the elephant's disappearance, the conversation dead ends and after leaving the lounge, the editor does not see the narrator again.

The Elephant and his keeper

The Elephant and the Keeper in this story have a very special relationship. Its like they can communicate with each other without using any words, but by taps an the leg from the keeper. The keeper is a very old man who seems to be in his own little world with the elephant. He isn’t very talkative but is kind when he is spoken to. Both of them seem to be just existing and nothing else in their life is really going on. The story states that the elephant is a very old and most elephants live to be between 70 and 80 years old. Therefore the keeper and elephant were probably paired together for at least 30 to 40 years.

Its obvious that the Keeper and elephant were more than just partners in a sense. It seemed like whatever one would do the other was right behind. It seemed only right that if the elephant would vanish so would the keeper and vice versa. Nobody knows what happened to them so their can be a lot of speculation.

The unnamed elephant and his keeper are symbolic characters in the story, representing traditions, or an old way of life. Both are literally replaced and moved to the side by the new way of life, high-rise condos and affluence. News of the elephant is right at the end of the newspaper and the search for the Elephant is very short-lived. The chain around the Elephant’s leg “struggled with all its might for a hundred years and never broken the thing”.

The mayor negotiates the agreement among the town, a real-estate developer, and the zoo's former owners to relocate the elephant to new surroundings after the old zoo closes down. A minor character, the mayor is a kind of stock figure of a suburban politician who holds ineffective news conferences following the elephant's disappearance.

An unnamed narrator tells the story of the disappearance of an old elephant and its keeper from the Tokyo suburb where he lives. A thirty-one-year-old man who works for the public relations section of a major electrical appliance manufacturer, the narrator obsessively tracks the elephant's story from the time of its relocation to an old elementary school gym through its mysterious vanishing. He meticulously keeps a scrapbook of articles on the elephant's disappearance and witnesses the strange circumstances that may account for the occurrence. Like many of Murakami's characters, the narrator is an isolated and quirky person who seems bewildered by the absurdity of his daily life. He also meets and thinks about courting a young magazine editor. However, following the elephant's disappearance, the narrator finds that he has become so unsettled by the loss of balance in the world that he cannot act, and he never bothers to ask the editor out.

One of the major themes of the story is the idea of things being out of balance. This theme is introduced when the narrator tells the editor about the importance of unity in kitchen design, as he states, “Even the most beautifully designed item dies if it is out of balance with its surroundings.” The narrator later emphasizes the importance of balance between a creature and its environment when he talks about witnessing the change in the elephant's size in relation to the keeper's size. He states that the balance in size between the two has become more equal, because the elephant has shrunk or the keeper has gotten bigger, or both. Following the disappearance of the elephant and the keeper, the narrator again expresses the idea that “things around me have lost their proper balance.”

Related to the theme of imbalance is the difference between appearances and reality. The narrator points out that the article covering the story of the elephant's disappearance is strange, because the reporter tries so hard to maintain that the elephant escaped, when the facts indicate that the elephant had to have almost magically vanished. The characters in the story try to maintain an appearance of normality in the face of an event that defies logic, leading to pointless acts that do not address the nature of the situation.

Another theme of the story concerns how modern developments have supplanted old ways of life. The story takes place in an affluent Tokyo suburb during the 1980s, when Japan was experiencing an economic boom. The event that sets all the other events of the story in motion is the construction of high-rise condos, which literally take the place of the old zoo, forcing the elephant to be relocated to the new elephant house. The old elephant and its aged keeper are emblems of former times, ways of life, and longstanding intuitive relationships, which have been pushed aside by commercial ventures.

Throughout the story, Murakami subtly reveals how the vanishing of the old ways leaves people feeling disoriented and how the new ways of being create a sense of disconnection and unease.

Essays about the book

(Source of the article: www.geocities.jp)