Born in Beijing in 1965, Hong Hao has been presenting some of the most visually stimulating art works in the Chinese contemporary art scene.

His ability to form different objects in different sizes, colors and shapes into a coherent and attractive work of art is immediately apparent at first glance. This coherence is far from being confined to the visual aspect, it is displayed through the content of his work, the material and objects used but mostly by the story each work tells the viewer. Hong, an obsessive collector, tells us his life story through daily life objects. This story is displayed in a way that it gives the viewer a sense of familiarity of Hong’s experiences.

Although one could claim that there are some features of Pop Art in Hong Hao’s work, his art remains very independent and unique and cannot be clearly categorized under any specific school of contemporary Chinese art. 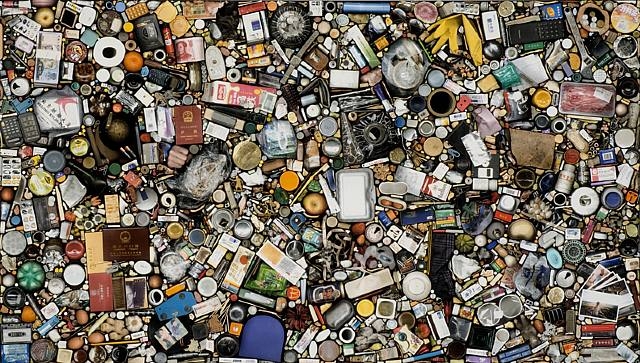 One of Hong Hao's best known photographic series, "My Things", opened up a new realm of personal expression for the artist. The photographs are composed of thousands of scanned images of objects from his own life. These commonplace things are arranged by the artist using a computer. There is no traditional photo taken by a camera. The objects are shown life size and some represent over 20 years of accumulation on the part of the artist while others could have been part of that day's lunch. These micro universes, from afar like satellite photos, close up invite a moment of intimacy, a glimpse into the life of the artist, a discovery of contemporary China and a chance to pick out what we would find in our own homes 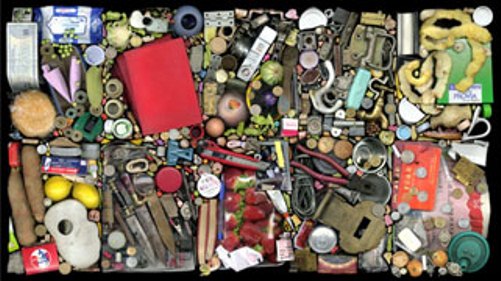 Hong Hao is a highly independent artist, not forming part of any school. His work is innovative, astute and satirical.

Much of his work deals with illusion, appearance and preconception.

He has spent many years working on a book of maps, called the Scriptures, that reshapes the world according to different forces. For example one map, New World Order, shows the world rearranged geographically and the names of large corporations used to name the countries. Another redistributes land mass according to military and economic strength. Another replaces the names of capital cities with popular expressions or words, yet another shows nuclear arms stationed in selected sites the world over. Hong Hao's intent is to confuse and thus challenge orthodox perceptions. He continues this challenge with great irony and less foreboding in his photographic series Beijing Tour Guide,1999-2000.