About the artist - Elizabeth LeCourt 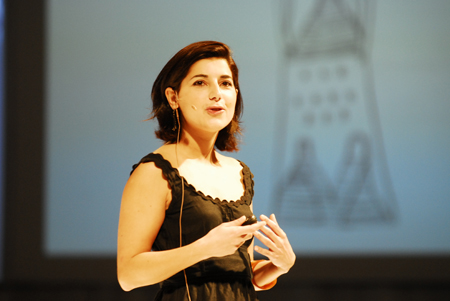 Elizabeth Lecourt was born in Oloron Saint Marie in France in 1971. She moved to London to study at the Royal College of Art  and currently lives there. In 2002 she started a series of sketches with the idea of using maps for clothing as a way of representing the wearer's habitat and identity and making an intimate connection between the wearer and the garb.

MAPS are usually used to help us to find our way through streets, cities, countries and across the world. They are produced by cartographers to help us understand the world we live in. They provide us with incredible detail but are also attractively presented in order to communicate geographical information more effectively.

Elisabeth Lecourt, in her series of over 60 pieces called Les Robes Géographiques has folded all kinds of paper maps and attached them together to create the shape of clothing. The clothes are not designed to be worn but rather to be displayed as a piece of art on the wall.

View a slideshow of Elizabeth LeCourt's variety of artwork

Sensitivity and vulnerability are the main subjects in the work of the artist Elisabeth Lecourt.

Her  head turning work includes her intriguing line of map-wear. She folds and cuts individual maps by region to produce clothes not to be worn but rather hung, mostly pleated parochial dresses and button-down shirts made out of modern maps.