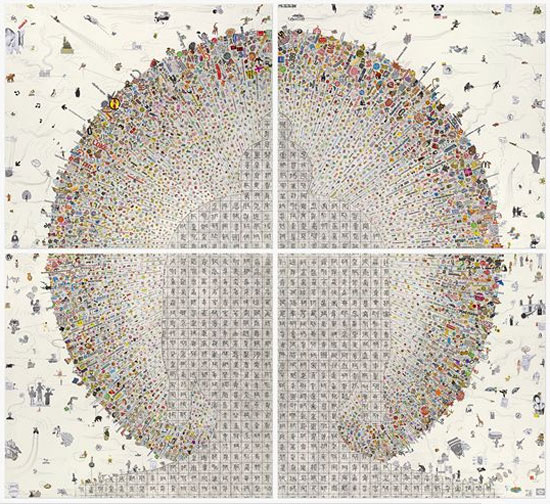 Gonkar Gyatso is a contemporary artist, born in Tibet and living for over a decade in the West. He is the founder of Contemporary Tibetan Art gallery.

Click the image below to see a close-up view of the work. Use the magnifying glass to see detail 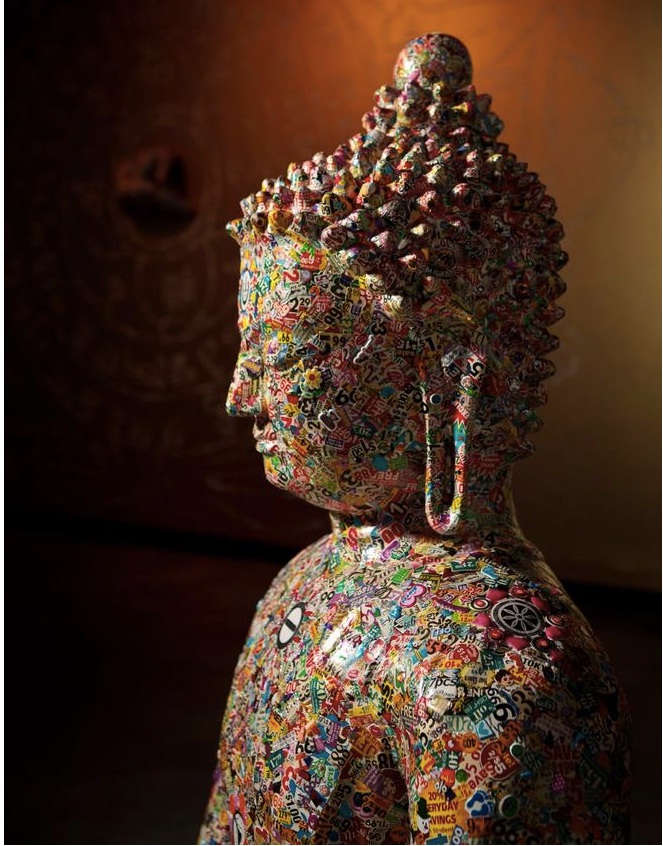 'Excuse me while I kiss the sky', 2011 (high view)Stickers, paper collage, and pencil on cast polyurethane sculpture

Hear the artist talk about his background.  [Video source : youtube] 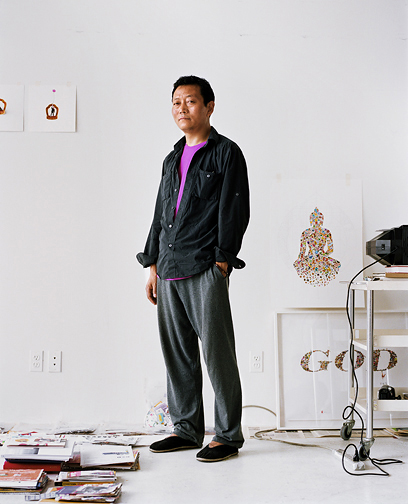 EARLY LIFE : He was born in Lhasa Tibet in 1961 , His early years there coincided with the period of the Cultural Revolution and hegrew up in an environment of Maoist ideology and imagery - his father was a soldier in the People's Liberation Army, and his mother a clerk in a government office. He says: "Everything in our home was Chinese and the entire family adhered to Party guidelines." He attended secondary school in Beijing during the era of the Beatles and Vietnam and then went on to study traditional Chinese calligraphy and landscape in Beijing, where he became the first Tibetan to paint a mural in The Great Hall of the People

RETURN TO TIBET : On returning to Lhasa where he taught for almost 6 years at the university, Gyatso began to question the Chinese authorities' dominance of Tibet. Although he still continued to defend Maoism, over time he came to understand the distinctiveness of his own "minority" heritage and to realise that he like many other young Tibetans he too suffered from a sense of split personality as a result of reaching adulthood in a version of Tibet constructed by China. Gyatso went on to found the "Sweet Tea House" school of contemporary artists in Lhasa in an effort to try to reinstating Tibetan identity and rejecting the styles of Chinese masters.  In 1989, shocked by the crackdown in Lhasa after pro-independence protests and the Tiananmen Square massacres, he moved to Dharamsala, India, (where the Dalai Lama is based) in 1992 to study traditional Tibetan thangka (scroll painting), before moving to London in 1996 where he now has an art gallery, the Sweet Tea House Gallery.

ARTWORK AND INFLUENCES : His artwork from around 1990 explores how Tibet and Tibetans were changing, including himself and how continual migration was causing this shift in identity and belonging. His current work combines traditional calligraphy and the iconography of Buddhist thangka with collages of colourful stickers, cut-out text and mass-media imagery, subverting typecast notions of Tibetan culture and considering the popularisation of Buddhism in the West.

What does the artist say about himself?

In this video hear the artist talk about his background and his art influences. [ Video source : youtube]