(This image is from the Banksy webpages, click to see more)

Banksy is a quasi-anonymous English graffiti artist. According to Tristan Manco, Banksy “was born in 1974 and raised in Bristol, England. The son of a photocopier technician, he trained as a butcher but became involved in graffiti during the great Bristol aerosol boom of the late 1980s.” His artworks are often satirical pieces of art on topics such as politics, culture, and ethics.

He’s gone from a teenage tagger to a well-known artist making multi-million dollar art. His style and message have, ironically, been wholeheartedly embraced by the very type of people he mocks. (from BoredPanda)

While on the topic of graffiti art, it is important to highlight this quote from a BBC News article. The incident referred to, happened in Singapore during 2010. The full article can be accessed from the link.

"Vandalism in Singapore can carry a fine of nearly £1,000 or three years in jail and three to eight strokes of a cane." 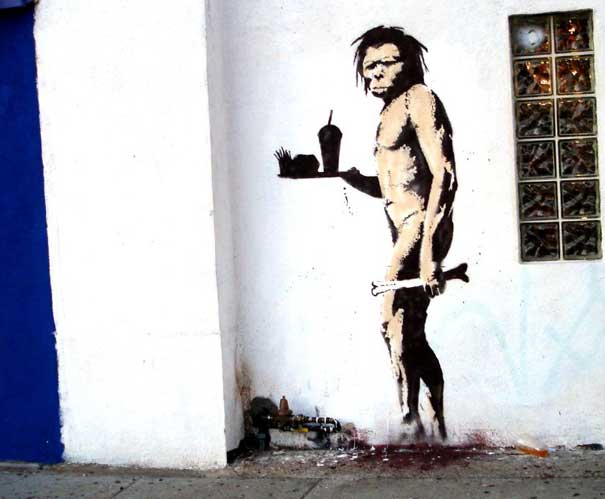 For years the graffiti artist known as Banksy has been the art world's Deep Throat: a hugely influential figure whose identity remained shrouded in mystery. Now, like Deep Throat, he has been given a name. Read more from image link.

In the Video below, a news channel covers banksy, the most subversive and politically controversial grafitti artist, at the Palestine/Israel segregation wall. [video source : youtube]