Robert Frost was born on March 26, 1874 in San Francisco, California. He spent the first 12 years of his life there, until his father, William Prescott Frost Jr., died of tuberculosis. Following his father's passing, Frost moved with his mother and sister Jeanie to the town of Lawrence, Massachusetts.

Robert Frost was the most popular American poet of the twentieth century. Most Americans recognize his name, the titles of and lines from his best-known poems, and even his face and the sound of his voice. Given his immense popularity, it is a remarkable testimony to the range and depth of his achievement that he is also considered by critics to be one of the greatest, if not the very greatest, modern American poet.

A Timeline of Frost's life

Frost's father, journalist William Prescott Frost, Jr., dies of tuberculosis. With no money to support themselves, Frost, his mother, and his younger sister Jeanie move across the country to Massachusetts, to be cared for by his paternal grandparents. 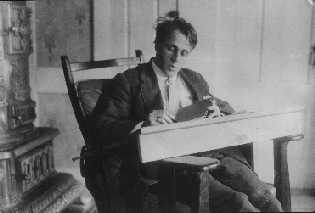 In 1895, Frost married Elinor Miriam White, who became a major inspiration in his poetry until her death in 1938. The couple moved to England in 1912, after their New Hampshire farm failed, and it was abroad that Frost met and was influenced by such contemporary British poets as Edward Thomas, Rupert Brooke, and Robert Graves. While in England, Frost also established a friendship with the poet Ezra Pound, who helped to promote and publish his work.

By the time Frost returned to the United States in 1915, he had published two full-length collections, A Boy's Will and North of Boston, and his reputation was established. By the nineteen-twenties, he was the most celebrated poet in America.

Archival recordings of former poet laureate Robert Frost, with an introduction to his life and work. Recorded at the Library of Congress in 1959. 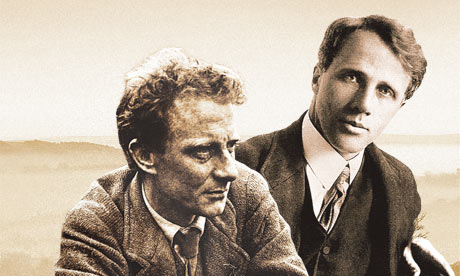 When Thomas and Frost met in London in 1913, neither had yet made his name as a poet. They became close, and each was vital to the other's success

Everybody knows what the regular Frost is: the one living poet who has written good poems that ordinary readers like without any trouble and understand without any trouble: the conservative editorialist and self-made apothegm-joiner, full of dry wisdom and free, complacent, Yankee enterprise…. It is this "easy" side of Frost that is most attractive to academic readers.

The writer of this articles thinks "many of these poems are extraordinarily subtle and strange, poems which express an attitude that, at its most extreme, makes pessimism seem a hopeful evasion; they begin with a flat and terrible reproduction  of the evil in the world and end by saying: It's so; and there's nothing you can do about it; "