A guide to resources on The Celts for your Year 7 History course, compiled by your Librarians

When and where did the Celts live?

The Iron Age Celts lived in central and western Europe from 750 BC. The name 'Iron Age' comes from the discovery of a new metal called iron. The Celts found out how to make iron tools and weapons. They were farmers and lived in small village groups in the centre of their arable fields. There were many groups (tribes) of Celts, speaking a vaguely common language. The Celts were also warlike people. They fought against the people of Britain and other Celtic tribes. The Iron Age ended in 43 AD when the Romans invaded Britain.

Click on the image to go to the interactive zoon --  stories and games!

Task: Write down the 5 most interesting things that you discover about them. 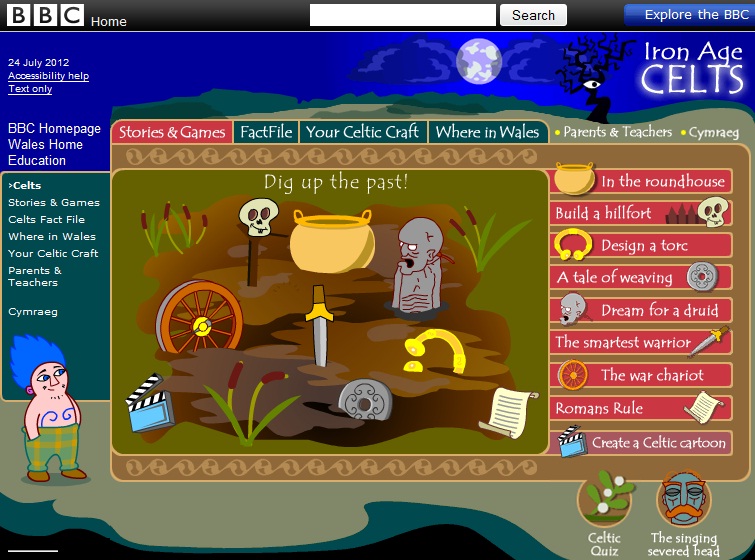 Click to play with the interactive map of Celtic and Roman lands.

What do celtic remains/evidence tell us about them?

The Celts actively traded with the Mediterranean world, exchanging notably their iron tools and weapons for wine and pottery. They also imported amber from the Baltic to resell to the Romans and Greeks.

The Celts were skilled arable and pastoral farmers. They grew wheat (to make bread), barley, rye and oats in small fields. They kept cattle and sheep to provide manure, wool or hide (leather) and food.

The Celtic tribes lived in scattered villages. They lived in round houses with thatched roofs of straw or heather.The walls of their houses were made from local material. The houses had no windows.

Hillforts were groups of houses built on the top of hills. Many of the hillforts had high embankments (mounds of soil) and deep ditches (holes) around a group of round houses to look impressive and to defend them from raiders. The largest and most complex Iron Age hill fort in Britain today is Maiden Castle in Dorset.

Many Celts went into battle unprotected by helmets or armour. They often fought naked. Celtic warriors carried long, or oval shaped shields, spears, daggers and long slashing swords made of iron. The Celtic warrior's deadliest weapon was his long sword, which he whirled around his head and brought crashing down on the enemy. Celtic shields were made of oak, probably covered in hide or felt, and had a central strip of iron.

Clothes were made from wool and dyed with natural vegetable dyes (plants and berries) and woven by hand on a vertical loom.

The Celts also loved to wear jewellery made from bronze, gold, tin, silver, coral and enamel.

The Celts believed in many gods and goddesses. Celtic priests, called Druids, were the link between the supernatural world and the ordinary human one. It is likely that they knew how to read and write, and they certainly had a good grasp of mathematics.

The Celts made many sculptures of human heads in stone or wood. They believed that the human soul lived inside the head.

The Celts believed that the human soul had an afterlife, so when a person died they were buried with many things they would need for the after life.

Were the Celts civilised?

It is often thought that Celts were barbaric creatures because there is no written record of the Celts stemming from their own documents. However, we can piece together a fair picture of them from archeological evidence and historical accounts from other cultures. The remains and evidence show that the Celts were very civilized and were just as advanced as the Romans.

The Celts built roads, had villages, had farms with better ploughs than the Romans.

Celtic craftsmen were superb, the decoration of the Celtic weapons, chariots and artifacts was in many ways superior to those of the Mediterranean cultures.

Celtic Women certainly had much more freedom and rights than in Roman society. Celtic women could sometimes become powerful tribe leaders, and were also known to go to war.

In general, Celtic religious sacrifices were less cruel and barbaric than what the Romans did. The Romans organise games in which human beings fought with each others to death for the pleasure of spectators. The Romans also crucified political opponents, and had prisoners killed or eaten alive by wild beasts in arenas.