The Himalayas were formed due to the impact of the Indian tectonic plate travelling northward at 15cm per year to impact the Eurasian continent, about 40-50 million years ago.  The lighter rock of the seabeds of that time were easily uplifted into mountains resulting in the Himalayan arc.  The summit of Mount Everest is therefore made of marine limestone!

Explore the links on this page to find out more information about The Himalayas.

News on The Himalayas

The latest news on The Himalayas from The Guardian website:

A video of photos from the 2011 TTS trip to the Everest Base Camp in the Himalayas of Nepal.

(Many thanks to Mr R Stretch for these photographs)

A World Wildlife Fund video about the threats to the unique people, places, and wildlife of the Eastern Himalayas in a rapidly changing climate.

Websites about the Formation of The Himalayas 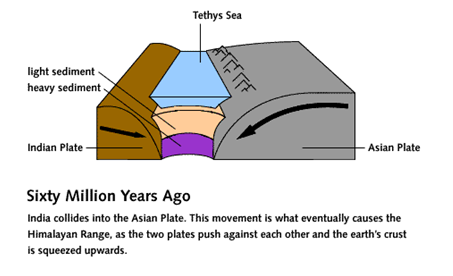 Click on the image above to find out how the Himalayas have formed over the last sixty million years.

More websites with information on The Himalayas 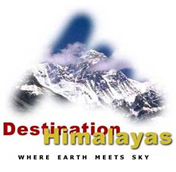