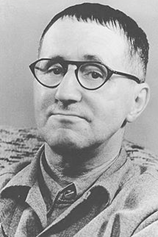 Bertolt Brecht was born in 1898 and died in 1956, his original name was Eugen Berthold Friedrich Brecht.  He was a German poet, playwright and theatrical reformer whose epic theatre strayed from the conventions of theatrical illusion and developed drama as a social and ideological forum.

Bertolt Brecht in the News

Bertolt Brecht in the News

Bertolt Brecht in The Guardian.