KS3 Drama - The Ramayana: The Events

King Dasaratha - and his four sons 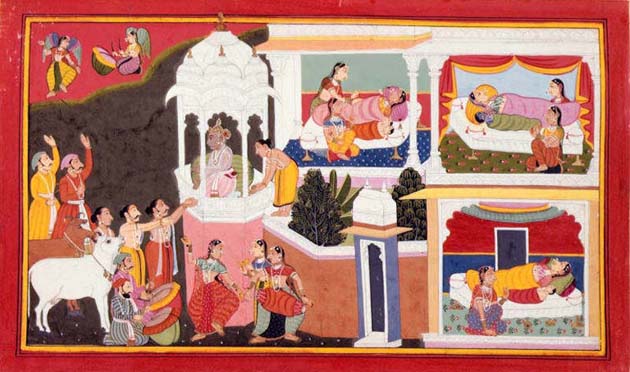 Dasaratha ruled a land called Koshala in northern India and his capital was Ayodha. He was unhappy however because he had no heirs. The Gods decided to grant him four sons, so that Vishnu could be reborn as a human being. Kausalya gave birth to Rama, who was one half of Vishnu, Kaikeyi to Bharata who was one sixth of Vishnu and Sumitra to twins, Lakshmana and Satrughna, who were both one sixth of Vishnu. Click on image to read more.... 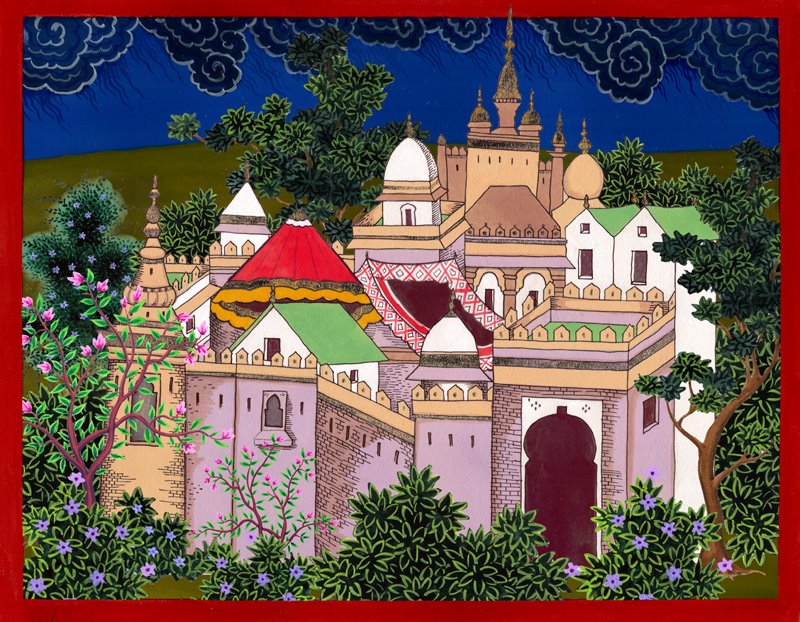 Ayodhya, capital of the kingdom of Kosala, was the birthplace of Rama and the city from where he ruled as king-avatar. As such it is the most sacred site of Rama legend. Valmiki’s Ramayana describes it as a fortified city, situated on the banks of the river Saryu, 12 yojanas (42 km) in length and 3 yojanas (10.5 km) in breadth. It had handsome palaces (with seven courtyards) for members of royal family, wide streets for chariots, and parks and gardens. 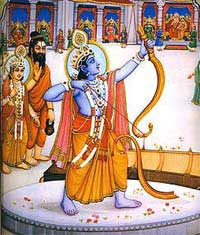 Pinaka was the bow that Sri Ram broke during the Swayamvara (see Glossary) in the Ramayana to marry Sita. Pinaka, also written as Peenaka or Peenak, is the bow of God Shiva and He had gifted it to Parashuram, the incarnation of Vishnu. More here

Kaikeyi asks for a boon...

Kaikeyi, Bharata's mother rejoiced in Rama's success and looked forward to his coronation as king. But her evil maid Manthara poisoned her mind and reminded her to ask Dasaratha the two boons that he owed her...

Rama is exiled for 14 years 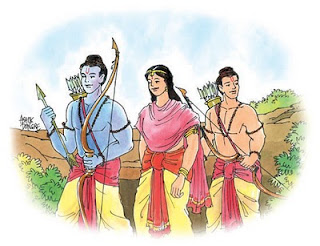 Bharat's mother Kaikeyi, goes to the king and demands from him the two boons he had promised her sometime earlier in life. She demands to send Rama to exile in the forest for fourteen years and make her son Bharat the heir of the kingdom. King Dasrath who is in great dilemma and pain, eventually bows to her demands.

Rama accepts his father's decision without any argument. Lakshman decides to join his brother in exile and so giving an example of brotherly loyalty.

While on his journey through the various forests as part of his Vanvas (see Glossary), Rama, Sita and Laskhmana arrived at Panchavati forest in the western part of India. Panchavati is the name of a fascinating and alluring valley in the heart of the dark forest Dandaka. Panchavati flourishes in fruit trees and limpid waters, like Nandana the garden of Indra. By the advice of the sage Agastya, this blooming valley was selected by Rama and Lakshmana for their hermitage when they were in exile.

It is here that Ravana's minister Mareech changed himself in the form of a beautiful golden deer! Jumping here and there, it caught the sight of Sita. Ram and Laxman were also present in the hut. It is from this hermitage that Ravana carried off Sita... 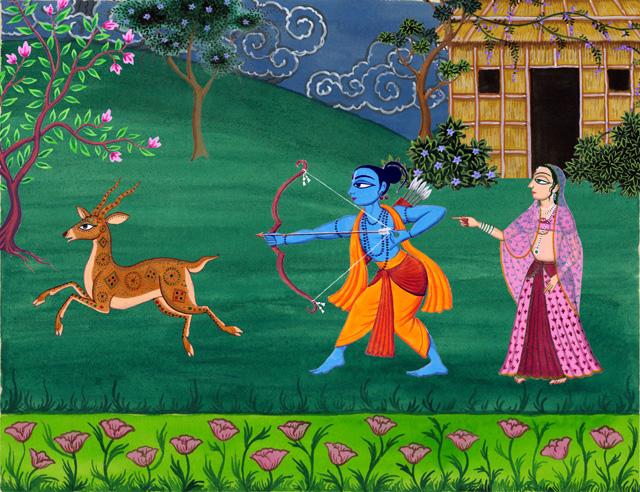 The demon Mareech transformed into a golden deer to attract Sita and lure Ram into pursuing it. Lakshman was left to guard Sita while Ram chased the golden deer.

As soon as the deer - demon Mareech - got the hint of Ram coming after him, he fled. At last Ram shot his arrow which mortally wounded the deer.

On falling to the ground, deer Mareech shouted, mimicking the voice of Ram, "O brother Laxman, rush to help me, I am wounded."

This he repeated thrice in a very loud voice that would reach the ears of Sita and Lakshman. On hearing the cry of her husband, Sita asked Lakshman to rush to help Ram. 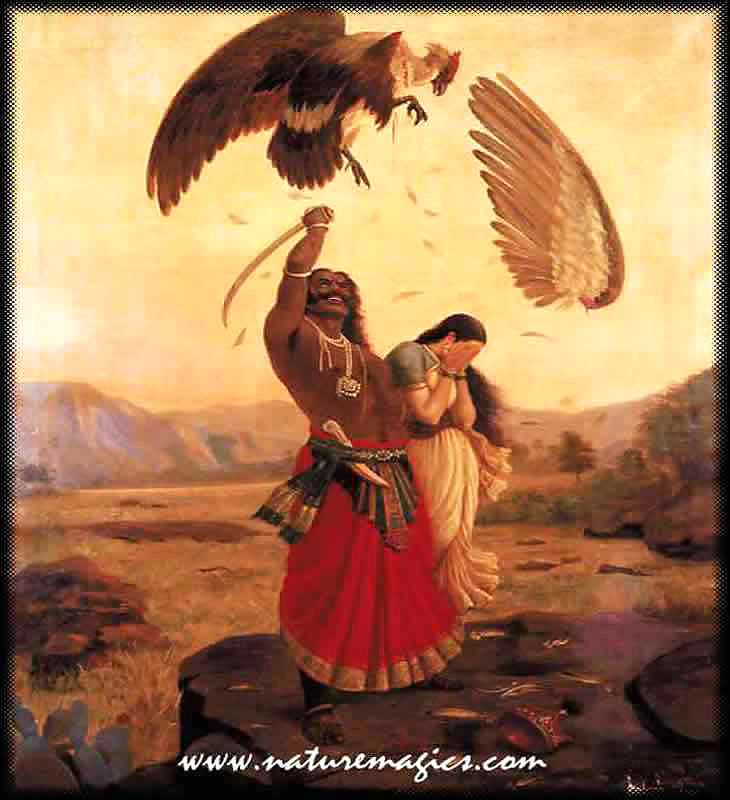 Once Lakshman left in search of Ram, Ravana appeared in front of the hut in the guise of a holy man, begging for alms. When Sita approaches him to gift the fruits and food, he compels her to cross the line (Lakshman-rekha, which protects her). Soon as she does that, he forcefully abducts her and carries her off. As he travels with her, the brave vulture Jatayu, intercepts and battles Ravana, to protect Sita. Jatayu's age and Ravana's strength are no match and the brave bird soon falls, helpless.

Scenes from the Ramayana 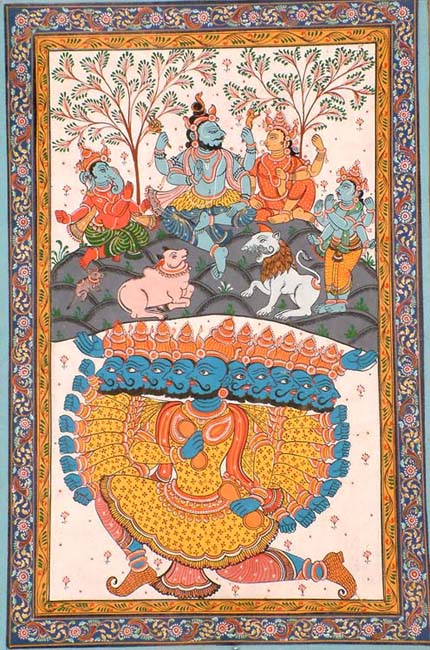 Click on image for paintings of scenes from Ramayana 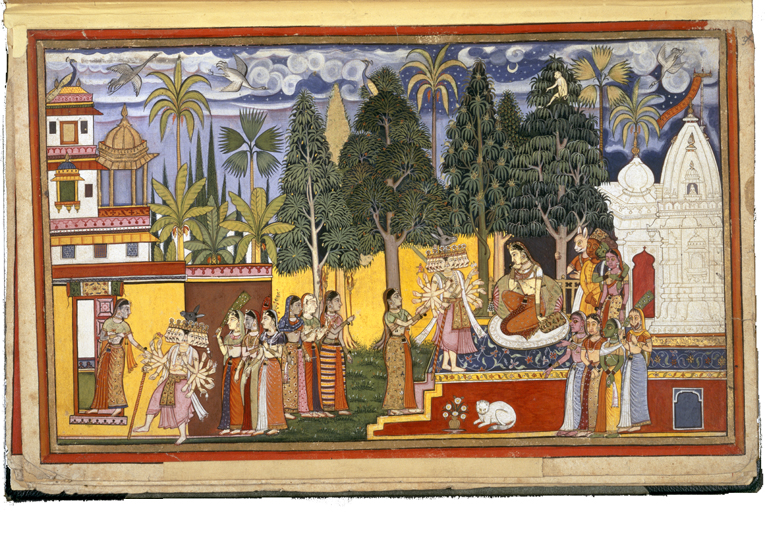 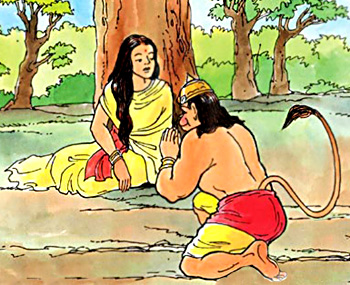 Having shrunk to the size of a mouse, Hanuman ran through Lanka, looking for Sita. He found her held captive in an Ashok grove near Ravana's palace. She was guarded by hideous demonesses and harassed by Ravana, who wanted her to forget Rama, and marry him instead. She was sitting under a tree crying. Meanwhile Hanuman climbed the tree, dropped Rama's ring into her lap, and told her Rama will come and save her. 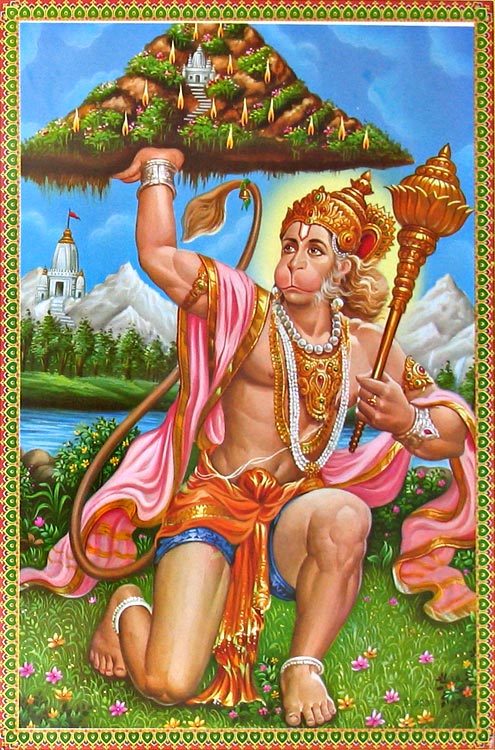 During th battle with Ravan's army in Lanka, Lakshman is so badly wounded, it seems that he will die before sunrise. The Monkeys and Bears decide that Hanuman must leap to the Himalayas and bring back the healing herb from the Medicine Mountain to save Lakshman's life. When he finds the mountain, he doesn't know which is the magic healing herb. So Hanuman wraps his arms around the whole mountain, pulls it out of the ground, lifts it up onto the palm of his hand and flies with it back to Lanka. The healing herb is picked and given to Lakshman. Lakshman is healed and filled with energy. 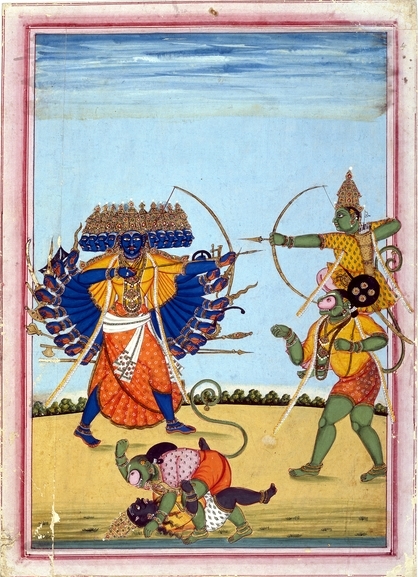 Rama, Lakshman and the monkey army build a causeway from the tip of India to Lanka and cross over to Lanka. A might battle ensues. Rama kills several of Ravana's brothers and then Rama confronts ten-headed Ravana.Rama finally kills Ravana.

Ashram - A hermitage in the forest where a sage / teacher (guru) lives with his disciples and imparts knowledge.

Vanvas - A duration of stay in the forest.