A guide to resources on electromagnetic waves, from radio to gamma - their use, danger and occurrence, compiled by your librarians.

X-rays were discovered by Wilhelm Röntgen, a German physicist, in 1895.

He observed that a sheet of paper coated with barium platinocyanide glowed when a cathode ray tube  was turned on. He received the first Nobel prize in physics in 1901.  Röntgen noticed that when his beam of radiation was turned on, a fluorescent screen in his lab starting glowing. He put his hand between the tube and the screen and saw his bones projected onto the screen. Just like that, X-ray photography was born! 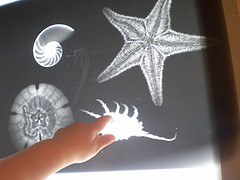 Satellites with X-ray detectors  are used for X-ray astronomy. Objects that emit X-rays like black holes similar to a Radiologist's X-ray machine, and the detector on the satellite is like the X-ray film.  These detectors collect rays and other information like the number, energy of photons from which we can interpret the source of emission.

X rays find extensive use in the fields of diagnostic medicine and dentistry. As certain kind of tissue and bones / teeth are more dense than others can be used to detect any abnormal tissue growth or and deviations in bone structure.

X rays can be used to observe broken bones and torn ligaments, the detection of breast cancer in women, or the discovery of cavities and impacted wisdom teeth.... or in some cases swallowed objects!! (can you locate the foreign object in this X-ray of a little child ??) 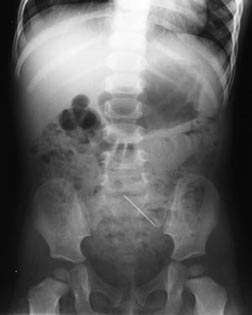 A CT scan produces a 3-dimensional view of the object being studied. Computed Tomography (CT) images provide this view, as shown in the drawing. A CT image is composed of pixels, where the absorption of X-rays makes the projected image less bright in a thin rectangular slab of the cross-section.

(image courtesy of the Mayo Clinic) Radioactive Decays produce particles that can disrupt the cells in the human body. In extreme instances, the exposure can lead to DNA mutations or cells / organs destruction.