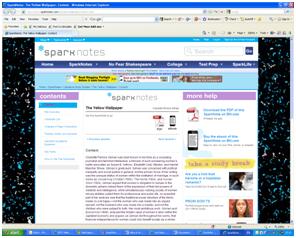 Spark notes are available which include a plot overview, character analysis and information on themes, motifs and symbols used in the book. 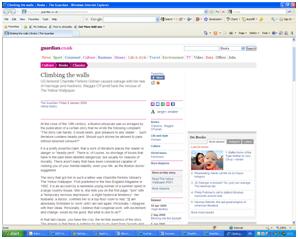 An article about The Yellow Wallpaper from the Guardian -

“Climbing the walls’ US feminist Charlotte Perkins Gilman caused outrage with her tale of marriage and madness. Maggie O'Farrell hails the reissue of The Yellow Wallpaper“ 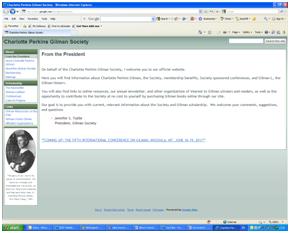 This is a five minute preview of the 1989 BBC version of The Yellow Wallpaper.

Concluding his provocative 1989 essay delineating how Charlotte Perkins Gilman's "The Yellow Wallpaper" functions as a Gothic allegory, Greg Johnson describes Gilman's achievement as yet awaiting its due recognition and her compelling short story as being still under-read, still haunting the margins of the American literary canon. Working from the premise that Gilman's tale adroitly and at times parodically employs Gothic conventions to present an allegory of literary imagination unbinding the social, domestic, and psychological confinements of a 19th century woman writer, Johnson provides a fairly satisfactory general overview of "The Yellow Wallpaper" as a Gothic production.

Type "haunted Gothic closets" in the EbscoHost search box to find this article.

Compares Charlotte Perkins Gilman's  novella, `The Yellow Wallpaper'   to Charlotte Bronte's novel `Jane Eyre,' by observing the significant resemblances Gilman's yellow   room bears toward Bronte's treatment of elements in her red room. The parallels between the rooms; The similarities between Bronte's John Reed and Gi;man's  John, the physician; Similarities in the names of characters.

Type "yellow Schumaker" in the EbscoHost search box to find this article.

The Yellow Wallpaper - an Opera

Webpage about Ronald Perera, including his opera, The Yellow Paper which was based on The Yellow Wallpaper by Charlotte Perkins Gilman.

The contents of this page are sourced from the TTS libguide - The Yellow Wallpaper by Suzanne Parfitt. You can access the full guide from the link below.