Abraham "Bram" Stoker was born in Dublin, Ireland in 1847. He was an Irish novelist and writer of short stories. He is most famous for his 1897 Gothic novel Dracula. Read more....

Books / Videos in the Senior Library

Read the e-Book from Project Gutenberg

If you scan this code with your mobile phone and appropriate software installed, it will open the phone browser to the mobile version of Project Gutenberg e-book for Dracula. 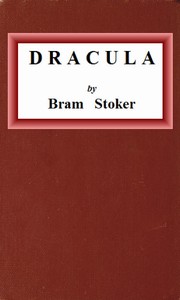 Bram Stoker's Dracula is what is known as an epistolary novel, a text written in a series of different documents usually from several different sources. In Dracula, the story is a compilation of diary entries, newspaper clippings, letters, and even a captain's log  from a ship.

The antagonist of the novel, Count Dracula is a vampire residing in Transylvania who comes to London in order to feed upon the dense population. He is described as having an aquiline nose, sharp teeth, and cold and pale skin. His aim is to try and turn as many Londoner's as possible into vampires like himself.

Short Video of the Movie from Columbia Pictures

Dracula with a Difference!