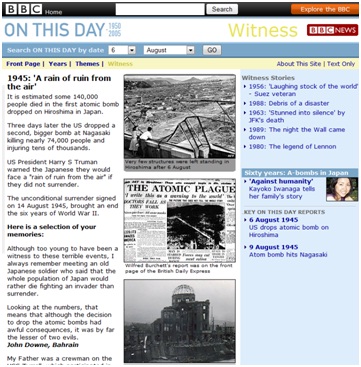 This BBC webpage includes a number of people's memories of the day of the bombing and their opinions about the decision to drop the bomb.

10 ways the world could end

This TED talk features Stephen Petranek talking about: How might the world end? He lays out the challenges that face us in the drive to preserve the human race. Will we be wiped out by an asteroid? Eco-collapse? How about a particle accelerator gone wild? (Recorded February 2002 in Monterey, California. Duration: 29:10.)

Judgement on the Dropping of Atomic Bombs on Hiroshima and Nagasaki 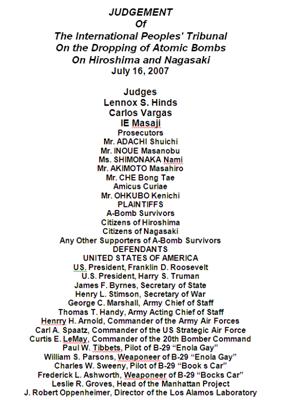 Click the link below to access a report on the Judgement of The International Peoples' Tribunal on the Dropping of the Atomic Bombs on Hiroshima and Nagasaki - July 16, 2007.

Click on the link below to watch a television clip about the morality of the Hiroshima bombing.

The website includes the following description of the clip:  "U.S. President Harry Truman never backed down on his assertion that dropping two atomic bombs on Japan was necessary. Otherwise, he maintained, half a million American lives would have been sacrificed to win the war. Forty years later, two military researchers are challenging that number, saying only 40,000 Americans would have been killed. In this CBC Television clip, physicist and anti-nuclear activist Arjun Makhijani says the decision-makers never considered the morality of the bomb."